We started off at the church with the trunk or treat.  It was fun seeing many of our friends, and it was great letting the kids just kind of go off on their own.  Regan trick-or-treated with Melissa Shoop, Landon with Keagan, Hayden took Turner, and Porter was with Layne.  Cooper and I sat at the Suburban with Donna and we handed out treats.  Cooper was a big hit.  Everyone wanted to take a bite of him!  Just in case you can’t tell, here’s the lineup:  Landon was a knight in shining armor, and then once we got home he became a ninja.  Cooper was a Gingerbread baby, Regan was Pocahontas, Turner was a skeleton, Porter and Hayden were both Stripling Warriors (they kept calling themselves “Rippling” Warriors). 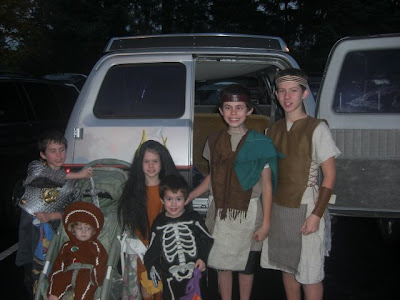 Cooper was so pooped out that he fell asleep on the way home from the trunk or treat. 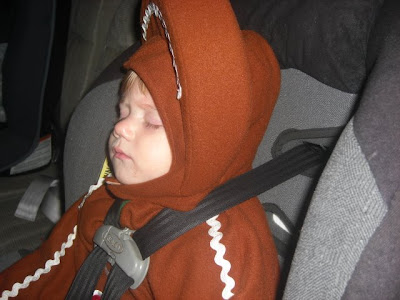 This is how cute he looked before we left for the trunk or treat. 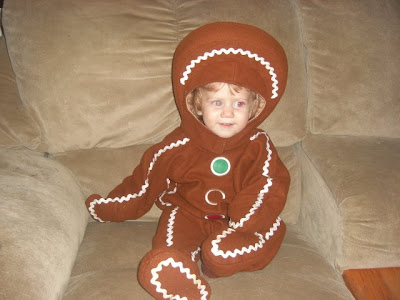 Regan, Landon, Hayden and I went trick or treating around the neighborhood after we got home.  Turner just did the neighbors right around our house, Porter didn’t feel like trick or treating.  Hayden went to a party at the Millers with a bunch of the beehives (and hopefully at least one other boy) (actually he probably wouldn’t mind if he was the only boy), so then Regan and I did more of our neighborhood, then headed down to Kurt’s.  We hung out there for a while and did a little karaoke and had some hot chocolate.  We waited for Marilyn and Jackie to get back so Regan could play with her for a minute before we came home.  We had a fun night.  I’m glad it’s Friday.  It will be nice to be able to sleep in (??) tomorrow.

We had lots of fun trick or treating tonight!  We went around a loop in our neighborhood and were really sorry we didn’t bring a stroller by the end of it.  Rose made out better than Lacy, probably because it was so cute hearing her say “Trick or treat!” and “Happy Halloween!”  Here’s a picture from last night– costumes were the same tonight.  Hope everyone had a grate night!

The cutest cheerleaders EVER! 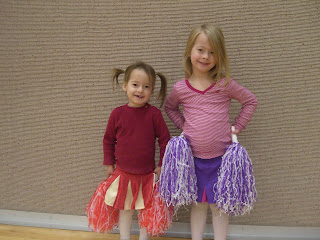 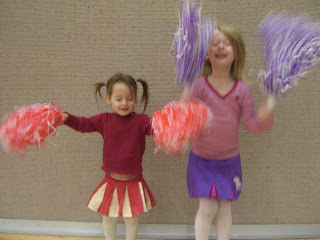 So here’s the plan for Hayden’s birthday/ordination.  He has requested a trip to the Seattle Auto Show for his birthday party.  Anyone who is interested in joining the malefolk from our family on an exciting journey of cars that we’ll never be able to afford, comment back and we can make arrangements to meet and/or carpool.  They will be going on Saturday.  It opens at 10, so I expect they’ll be at the doors just as they open.  Hayden has his first Stake Dance that night, so he’ll definitely need to be back in plenty of time to get ready for that.

He will be ordained on Sunday, so once again, anyone wanting to attend, please come to our Sacrament Meeting at 9 am.  And as an added benefit, you will get to see Porter pass the sacrament!  We will have a dinner at our house after church.  I think we’ll just do hamburgers, unless someone has a better idea.  So bring a side dish and/or dessert to go with burgers.  We can do a little planning for Christmas while we’re together.  And we will do some planning for our ultimate pie festival while we’re at it.

I knew Janet would have a bad day as she was really getting a cold yesterday, so today she stayed in bed much of the day and had a fever for a while.  I, in the meantime, was bouncing off of the walls.  The young Elders came by to use the computer and I think they expect to get lunch whenever they come here, but I didn’t offer any today.  Yesterday we made sandwiches for them and the people who drove us to stake conference, so we were running low on materials.  So, when they got hungry we went to the base and I decided to eat Popeye’s chicken.  I think they expected me to pick up the tab, but nope, I showed them how it is done and then started eating.  Later they had to take their car to the Opel dealer to change from summer tires to winter tires.  Not me, I did the change myself.

Mom seems better this evening.  I hope I don’t get it.  We will be leaving Thursday to go to Nurnberg for a Dry Council meeting, but we will spend the night there.  Friday we drive to Munich.  We haven’t been getting our mail from the mission so they called me today to check the address.  They send mail to:  Kirche Jesu Christi, Elder & …  Our mail box just had Elder and Sister Abersold, so it was way too confusing for the average mail delivery guy.

…that I entered the MTC.

So a couple weeks back, my work friend Chris asked me to go see the Whirling Dervishes with her. It seemed too bizarre an offer to turn down, and besides, I’ve always had an interest in the mystical.

The program consisted of two parts: the first half consisted of a woman talking about the history of the Mevlevi (the Whirling Dervishes). A small band of musicians–a viola, a traditional flute, a drummer, some sort of plucked string instrument (a harp?)–played, accompanied at times by singing. And a thin man slowly walked out onstage. He looked ancient–he was thin and wrinkled, he had a white beard and hair. He looked to be Turkish. His clothing was creamy white, with a skirt that nearly went down to the floor, and a tall cylindrical white hat, about twice as tall as a fez.

He went to the middle of the stage, and began to spin, counter-clockwise. He twirled by using one leg as an axis, and by using the other leg to make a quick brief push, enough to turn him around one full revolution. If you looked at him only from the waist up, it looked like he was being rapidly turned around, as if he were on a lazy susan.

With the music, and the narration (which at times included the poetry of Rumi) and the twirling, it was an almost hypnotic experience.

Later, other devotees came onstage, and twirled in different combinations. Sometimes, they made long revolutions around the stage besides their spinning. It brought to mind the ancient idea of “the music of the spheres”: humans imitating the motion of planets.

The second half of the program was an abridged version of the sema ceremony, which evidently appears to be a demonstration of the transcendence beyond death and burial.

It was a profoundly beautiful and strange evening. I am glad I attended.

Today we are taking a preparation day.  We don’t know when we will be able to take another one and want to get a lot of things done today such as shopping and planning, to get us through the next weeks.  This Saturday we have Stake Conference to go to.  We will go to the Priesthood Leadership meeting on Saturday afternoon in Erlangen, then Saturday night we have the adult session to attend.  Sunday we will have a 10 am session at the Stadthalle Fuerth.  We will ride up both times with members, should be fun.

Next weekend we have the Couples Conference in Munich.  We have to prepare a 15 minute workshop on member work.  We want to present something interesting, maybe we will get their attention with a funny skit.  I will be working on that today.  Dad has high council next Thursday and we are hoping we get permission to stay in Nuremberg on Thursday night so we can drive the couple who work at the outreach center to Munich with us.  They are nice, should be fun.  Unfortunately we will be gone over Halloween so we will miss our ward party and all the little trick-or-treaters who will come to our house(?).  Sunday we will be here for our regular meetings.

The following Wednesday we will be going to Nuremberg again for the mission tour of our area president, Robert C. Oaks.  That evening we will be hosting Elder Oaks at a fireside here for our returning/outgoing soldiers.  We will have a light dinner in our apartment before the fireside and then Elder Oaks and his wife and the mission president and his wife will leave immediately after the fireside so they can make it to Munich with enough time to get rested for the next days conference.  I am a little worried about the light dinner for several reasons.  We will be gone all day, who will cook this dinner?  I only have 4 real bowls and we will have at least 6 people here to eat.  The young elders are trying to get an invitation, so it may be 8 of us.  I have flatware for 4 people.  That means I need to borrow some stuff.  I need to plan ahead to be able to have something cooked and ready to warm up or else have something in the crockpot simmering all day.  Yikes!  A lot to think about.

Must get to work.  First things first, the presentation for the couples conference. 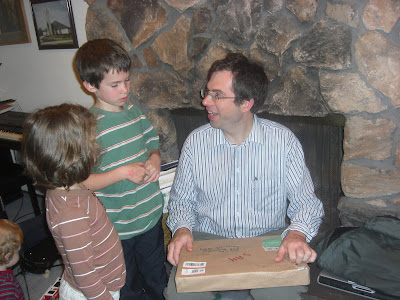 We invited Dale over for dinner tonight. Seeing as he couldn’t come up with an excuse quickly enough, he came over. We had fried rice and chocolate birthday cake. He brought over his birthday gift from Grandma and Grandpa and opened it here. 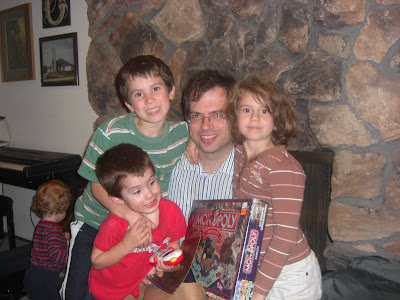 The kids wanted to bust it open and start playing right away! 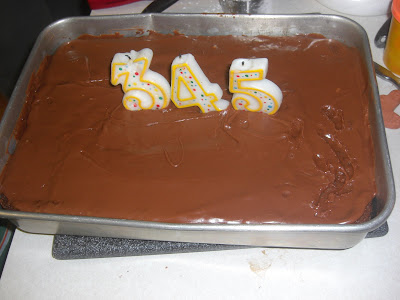 I didn’t have 39 candles, nor did I have a 9, so we improvised. Note the fingermarks in the frosting. I checked everyone’s fingers and Turner’s seemed to be the culprit. Which is unfortunate since he is the one with the grossest fingers most of the time!

Dale is a babe magnet where five year old girls are concerned. She couldn’t leave him alone. And he is very patient and sweet to her. 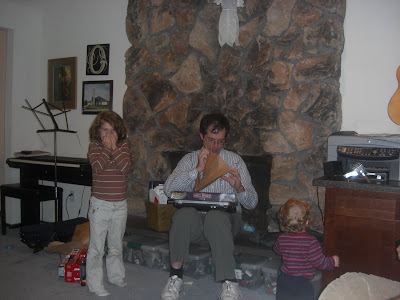 Regan gave him our present, a “Manga Messiah” book and said “Here’s a bag with a book. Oops!” Here she is “oopsing” that she gave away the present!

On Sunday, I went to the Seattle stake center (which happens to be in Burien, not Seattle, but I digress) to see a performance by Gladys Knight and the Saints United Voices choir.  It was a great show: while I’m not accustomed to hearing gospel music played in LDS church buildings (well, southern style gospel music – you know what I mean), and I’m certainly not used to clapping in church, it was a terrific show and I thoroughly enjoyed it.  It was clearly geared to help introduce people to the church, and there were a lot of investigators in there.  Sister Knight has a very powerful testimony, as does her husband.  And they did a great job helping to convey the message.

In unfortunate news this week, I went to the doctor’s office this morning to find out why my left foot has been hurting me so.  As it turns out, I have tendinitis, probably from the hike I went on ten days ago.  It’s not severe, thankfully, and they just instructed me to take ibuprofin, apply ice a few times a day, and go easy on it for a while.  Hopefully it will be healed by the time December rolls around – the last time I went to Europe, the same foot was in pain much of the time from when I injured myself on the job the year before.

And finally:  Dale is old, lol.